This week, "Diamonds" by Rihanna scores its fifth consecutive week at number-one on the airplay based national chart, with a total of 470 plays. The runner-up of the chart is "One Day" by Asaf Avidan, with 426 spins. At number three (3) with 395 spins we have P!nk and her newest smash hit "Try".
Also, on Monday March 25, the music video for "Ecou" by Elena Gheorghe premiered through YouTube and it is about to lead the song into the top ten of the chart for the following week.
As previously reported, this week's highest new entry is "Ready or Not" by Bridgit Mendler, at number thirty-nine. INNA has the most entries this week with: "More Than Friends", "P.O.H.U.I.", "INNdiA" and "Tu si eu".
Don't forget to check mediaforest.ro for the weekly updates and the daily news from overseas.
Publicat de Chris la 09:18 Niciun comentariu:

"Ready or not here I come, here I come / You're like a breath of fresh air in my lung"

The song "Ready or Not" by Disney Diva Bridgit Mendler became this week's highest new entry on the Romanian Top 100 at number thirty-nine (39) helped by radio airplay and fan requests sent to UTV and UTV HD. On the iTunes Chart, the single rises 77-23, while on the Pop Chart it moves from 19 to 9. On the official Digital Chart it keeps steady at number-eighteen.

For the eleventh week of the chart this year, "Diamonds" by Rihanna is still the number-one, for a fourth consecutive week. It is the song's 22nd week inside the chart and it lost 12% of its plays gathered the previous week. It gained a total sum of 467 spins on both radio and music television during these last seven days. This is the lowest #1 week figures, following 481, 488 and 490 spins per week during the last weeks. The song also tops both the Radio Songs Chart and the Video Chart, with 269 and 198 plays, respectively. 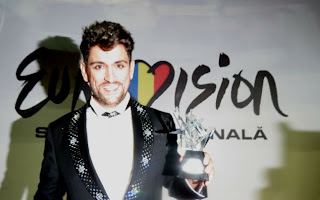 On March 9, Romania chose its representative for the Eurovision Song Contest 2013. After a tremendous journey of 32 song (12 reaching the final), the Romanian tele-voters  picked Cezar "The Voice" Ouatu to represent their country at the European-wide music contest in May. The winner song is entitled "It's My Life" and though it reminds of a Bon Jovi or a Dr. Alban, it has nothing to do with the classics. Following the unexpected outcome, the countertenor met with both acclaim and criticism. Not only Romanians, but also foreign Euro-fans dismissed the song and called it "horrible", or "disgusting". On the other hand, it has the support of big names such as Andrea Bocelli or Angela Gheorghiu.
He won with a total of 9,774  SMS+Phone votes, almost 1,000 more than the runner up. At the juries, it gathered 47 points, thus being at number three in their ranking. The betting odds and the fan polls, even though, indicated that Luminita Anghel, Al Mike ft. Renee Santana, or Electric Fence shall win the competition.
After the results were made public for the Europeans, Romania's position in the betting odds chart descended from its initial peak at #10 towards a disappointing #18 #20 #23 #33 (and still going down!). This means historical lows for the country when it comes to betting odds, after a top-three placing last year (when Romania only came up the twelfth) and top ten placings in 2006, 2009 and 2010.
For the moment, the early favorites of the contest are Denmark and Norway (with 3.00 to 5.00 odds), being represented by Emmelie De Forest and Margaret Berger respectively. The German representatives Cascada are also among the favorites to win

Also Eurovision-related, Agnetha (in the video above, former member of Swedish group ABBA) is releasing a new album this May ('A'). The lead single off the new record, her first in almost a decade, is "When You Really Loved Someone" a pure europop ballad with electro influences allover. It has all the chances to become an easy listening radio hit, what do you think?
Publicat de Chris la 04:55 Niciun comentariu:

...for a third week atop the Romanian Top 100. According to our ally Media Forest, Rihanna's "Diamonds" has been played for a total of 490 plays on the main radio/TV music stations in Romania for the past 7 days. As of the week-ending March 10, 2013 the song spends a third consecutive week atop the airplay based chart and gains 2 spins more than the last week (~+5% up). The previous weeks, it gathered 488, respectively 481 plays. BELOW YOU CAN SEE THE RADIO / TV STATISTICS. 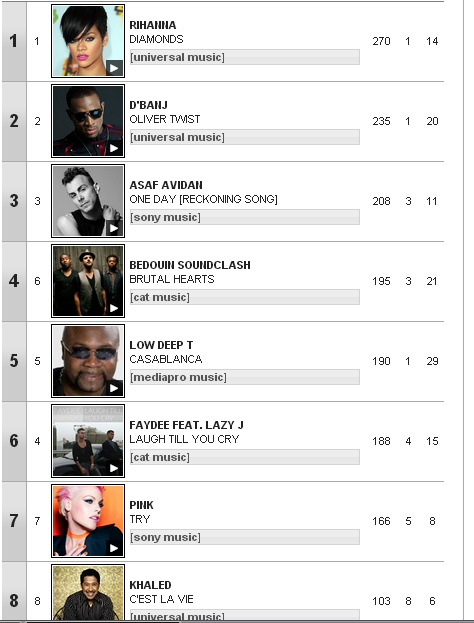 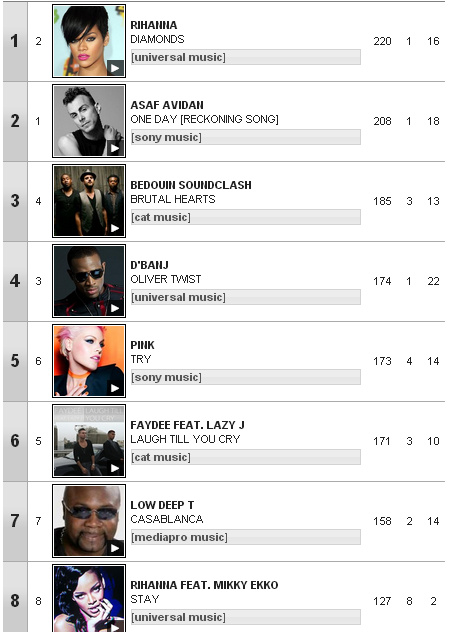 This is the Barbadian diva's sixth number-one in Romania, following "Umbrella", "Disturbia", "Rude Boy", "Love the Way You Lie" and "Only Girl (In the World)" with the last tree all being number-ones during the current decade. She is also the artist with the most top-five hit single in our national chart history, five other singles of her reaching the top five (namely "Don't Stop the Music", "Russian Roulette", "S&M", "Man Down" and "We Found Love"). All in today, this is RiRi's second most lengthy chart topper, only behind "Rude Boy" which spent two more weeks in the summit.
On the other hand, this week's runner-up is Asaf Avidan's "One Day" with 429 spins. It was also the number-one of the video chart, but it was dethroned on this week by "Diamonds". On the digital chart, "Diamonds" stills holds at number-one, marking over 13,500 donwloadable units sold within the first 6 months. Hurt's album 'Exile' also debuts within the top 200 albums chart, while P!nk's 'The Truth About Love' reached its 5,000th digital download. On the physical albums chart, we have INNA with her third studio album - 'PARTY NEVER ENDS' debuting at a rather underwhelming position just outside the top 10 (#11).

This is all for the time being, don't forget to check on Mediaforest.ro for the weekly charts and the newly introduced international charts for Moldova, the UK and France.